The wurst team is excited and curious to see what the new PTR changes will mean for the wc3 modding community. We are anticipating the release to the stable battle.net realms, and will add support to the wurst toolchain as soon as possible.

At this time, we do not plan to have a separate branch to support PTR installs. However, if the classic team continues to make extensive use of the testing realm, we may consider that option in the future.

We are actively thinking about what the PTR changes will mean for us and how it should affect 2018’s timeline. For example, now that 24-player maps are coming, we will prioritize support for editing map player metadata from vscode. 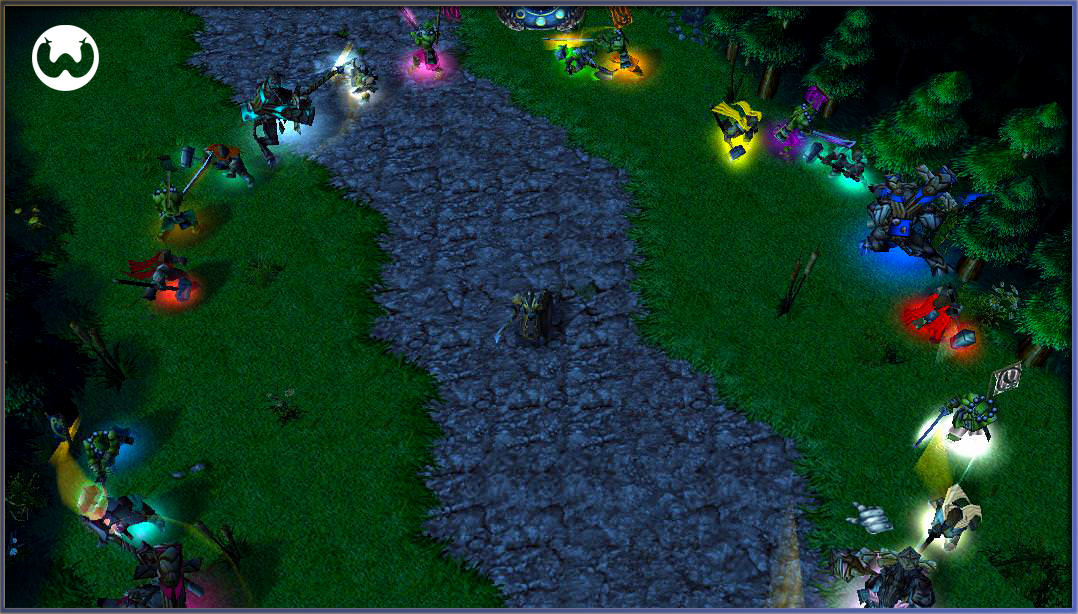 Above: 24 unique player-colors, in wurst!

We are quite a bit late with our blog post this month, as there were no major updates to present and we were focusing on quality work as well as keeping an eye on Wurst’s stability. That being said, in march we revamped the lambda syntax for more flexibility and cleaner code. Additionally we again have received a number of contributions from the community.

Note: We are still looking for Wurst Resources for our showcase!

Additionally, you can now get rid of begin and end keywords for statement lambdas if the lambda is the last argument in the current line. The lambda is them moved behind the function call like so:

With the new syntax the indentation defines the block. This allows one to define customized control flow, which looks very similar to a construct built into the language.

The begin and end syntax will of course remain for backwards compatibility and for when the lambda isn’t the last argument.

Spells are a very popular choice to script in wc3, and most maps have at least some scripted abilities.

Here we will show a concise example of how to combine object-editing, event listening and the use of closures to create a decent spell without much hassle.

In this case we are making a timed explosion spell called “Conflagration”. The explosion applies a burn debuff to hit enemies, which causes successive conflagration hits to deal bonus damage. We aim to make the spell easily configurable and in the end upload it to github so it can be easily imported into a wurst project.

To make a nicely configurable spell, it can sometimes help to think about the configuration package first. Based on the concept, we know in what way we want to allow the user to customize the ability, like:

To put this into wurst code, we create a new package with the variables from the list. In order for them to be configurable by the user, we must annotate them with @configurable.

Clearly, the above paints a picture of a quick, unit-style spell with fairly low damage and duration.

Next we’ll generate the required objects for our spell. We will be needing an ability object for the unit that uses the spell, and a buff object that displays the presence of conflagration visually and as status.

Thus we create a new package

Finally we create the actual effect. At the map’s initialization we register a spell event listener, which will fire when any unit casts our generated spell.

We are using EventListener.onPointCast from ClosureEvents.wurst to do do the event listening for casts of SPELL_ID. On a SPELL_EFFECT event with the right id, the following indented codeblock will be executed. The lambda parameters (caster, tpos) will be filled appropriately with the caster unit and the target point.

The spell in action

Creating a repository for our project

Finally, let’s create a git dependency from our wurst project. We will be using GitHub and it’s corresponding desktop app which requires a free account. If you don’t already have one, please create an account and setup the app.

Once you have the app setup, we can create a new git repo inside our project folder by choosing File -> Add Local Repository. Select the root of your project and then select create a repository: 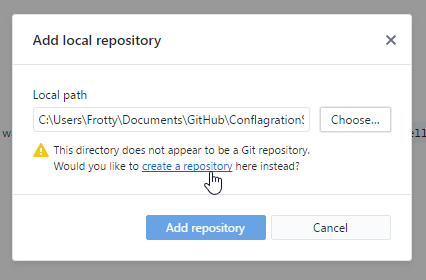 Leave all settings as is and create the repository: 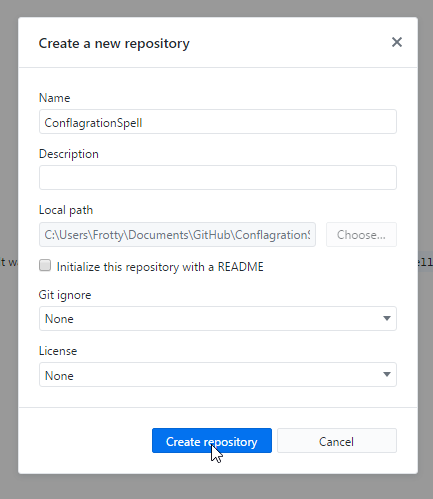 Hooray, our repository is created. All our existing files have been added to an initial commit. Files that shouldn’t be versioned are automatically ignored by the configuration generated by the setup tool. We can now publish our repository: 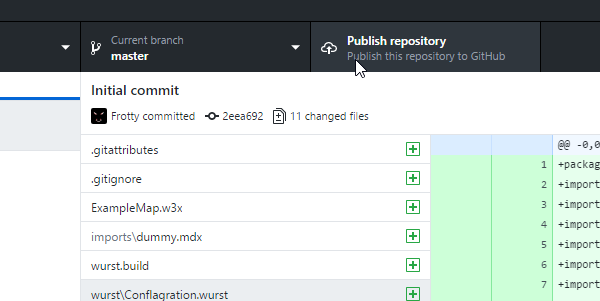 If everything went well, you repository is now published. You can view the repository we created in this blog post here: https://github.com/Frotty/ConflagrationSpell

Note If you want to know more about the git workflow, you can checkouts everal tutorials online, like this one.

Using the repository as wurst dependency

Open the setup tool and import the wurst.build file of some other project. Under Advanced you can now enter the link to the repository that we created above. Hit Update Project to update the dependencies. 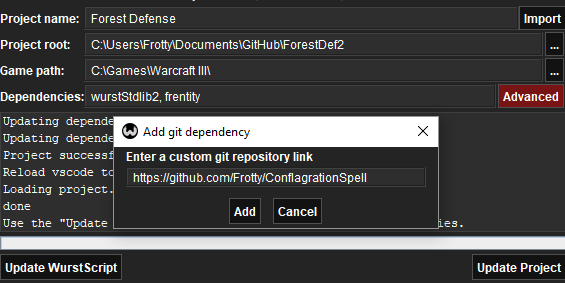 Reload VSCode and you should be able to import the spell as necessary.

And that’s it! Thanks for reading another Best of the Wurst blog-thing.